According to Internet traffic analysts Alexa, this website is now the 17,042,576th most-visited spot on the Internet. Let’s see if we can reach the top 10 by the end of this week. You can help this noble cause by putting your email address into the box on the right!

I imagine it’s quite unusual for a Politics lecturer to send out a mass email insisting that his students read the Wikipedia article about the film The Matrix, but that is indeed what’s happened. Furthermore, in the following lecture, Dr Hough put up part of the script on the projector and invited two students to act it out between them, one person portraying Neo and the other some other miscellaneous sci-fi-type person.

The reason for this touch of drama was that it illustrated ‘ontology’ just as well, if not better, than the ancient Greek allegory Plato’s Cave. I’m not so sure. (I’m also not convinced that any of it has much to do with political science, but I guess that’s why I’m not Professor Gabriel Webber!)

Yesterday, I was in an International Relations lecture about fascism. I’m not going to tell you who the lecturer was, but if I drop the hint that their brother was once the Czech Minister for Foreign Affairs, I think you’ll guess. If not, you can always czech. Sorry, cheque. He had numerous illuminating insights to offer, such as:

“There is no shadow of a doubt that German Nazism was highly racist.”

“The next thing [in this lecture about fascism] is rather controversial.”

And – featuring what I presume to be an entirely coincidental use of metaphor – “Hitler had a superficiality of thought, writing like a failed artist. Which of course he was.”

This week, the Award for Getting Their Priorities Right goes to The Guardian for this exciting news article with an unexpected twist in the final paragraph:

The Hitting the Nail on the Head Prize obviously goes to the subject of this BBC article:

The Creative Use of Online Media Award goes to the Butlin’s Mineworkers’ Open National Brass Band Festival, who appear to have suffered terrible things at the hands of Twitter. According to the BBC:

Meanwhile, Scotland is planning a referendum (artist’s impression below). 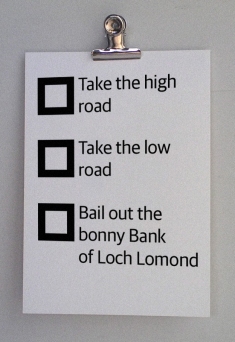 “So how did we get from Versailles to Wall Street?” [Answer: go over the Atlantic and turn left at Quebec.]

“In International Relations, you need to think about past, present and future. Next week we’re going to be looking at the future: the rise of fascism in the 1930s […] Why are you laughing, Gabriel?”

Me: “Why are there two knives on your bedroom floor?” / Mum: “Oh, they’re from my office canteen.”

“…such as Peter Mandelson, before he became Prime Minister. Sorry… [nervous lecturer’s giggle]“

The Adventures of G. Campbell Jnr.

In 1878, the intrepid G. Campbell Jnr. set sail for the New World: as an MP and a man of the world, he felt it was his duty to visit the United States. And he also had another reason: “I had a special desire to learn something of the nigger question, on which very little has been written on this country.” (His words not mine.)

Early-on in the book, Sir George shares his opinion of the characteristics of Americans, and in particular, their attitude towards war. But personally, I don’t think his assessment has withstood the test of time!

And, for a special bonus, celebrating today’s anniversary of the Greensboro sit-ins, let’s treat ourselves to Sir George’s chapter on The Capacities of the Negro. (This most certainly does not represent the views of any civilised human being.)

If the cap fits…

This week, the government got into a spot of bother over their plans to introduce a benefit cap. So Gabrielquotes is asking the key question, exactly what does a benefit cap look like? A Freedom of Information request on the subject was rejected, so our photographers have gone out and about to discover four possible designs, and you can vote by calling 090 9879 0654*