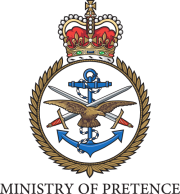 It has emerged that official Ministry of Defence credit cards (‘Government Procurement Cards’ no less) have been used for some rather interesting transactions. £20,000 on restaurants, bars and leisure activities attracted the attention of a Parliamentary committee. £1,220 on taverns, lounges and discos also, though just what distinguishes a bar from  a tavern seems rather vague.

There was also some expenditure on jewellery and cosmetics (it’s a man’s life in the modern army…) though the MoD claimed that these descriptions were misleading: “‘Jewellery’ includes maintenance of the office flexi-clock systems and ‘cosmetics’ covers purified water for military hardware.”

Yeah, it’s obvious when you think about it. And no doubt the £7bn listed under Playboy subscription was actually spent on our new aircraft carriers.

It turns out that this problem is far from new, and historians from the Centre for Utter Cock-up Research here at Sussex have discovered official guidance on the subject dating back to the 1770s.

Oh when you have a credit card from Government Procurement,
Don’t let it reach ‘The Guardian’ through spy or through informant.
Don’t use it to hire swimming pools for purposes external.
Use it to buy bullets for the Corporal and the Colonel. (This is not compliant with our Acceptable Rhyming Policy. -Ed.)

Oh when you have a credit card from Government Procurement,
Don’t use it to buy jewellery, no matter the allurement.
Don’t use the card to buy champagne, not even for a corkscrew.
Use it to buy walking boots for the Grand Old Duke of York’s crew.

Oh when you have a credit card from Government Procurement,
Don’t get used to abusing it through habit or inurement.
No cosmetics on the card: don’t make your hair all wavy.
Buy amphibious landing craft for the Royal Navy. (See me 9:30 tomorrow morning. -Ed.)

Oh when you have a credit card from Government Procurement,
Don’t use it for your restaurant bill, or you may face immurement. (You’re fired. -Ed.)

News from the trenches

I was getting all excited about September, because my School of Law, Politics & Sociology was due to move out of our temporary accommodation and into a shiny new £30m building replete with computer-generated lecturers (see left) and a mock courtroom especially for the Law Department.

But this week the University announced with an unfare (unfare, n., opposite of a fanfare) that the Law Department will not be able to take advantage of this mock courtroom; indeed, the entire School will not be moving in at all. “LPS, who had expected to move into the new building, will remain where they are in the Friston building.” Or, as one of my  Politics lecturers tweeted rather more accurately:


Another year in a box in the science car park it is for LPS at Sussex then ...

Meanwhile, the menace of outsourcing still continues to sweep the land:

Lord Justice Leveson spent the whole of Thursday glaring at Jeremy Hunt, a senior public official who compromised his impartiality by publicly identifying himself with a major international company. Meanwhile the LevesonBerry™ was receiving some attention while being  broadcast on live TV:

This week’s award-winner is one Boris Johnson of London, whose article in The Telegraph was a superb parody of the writing style of London Mayor Boris Johnson. “I don’t know if there are any liberal newspapers that still think they can boost their circulations by suggesting that we could have Sandi Toksvig or Stephen Fry as our elected head of state,” and all the rest of it.

There have also been elements of sadness this week, as Eduard Khil of Trolololo fame, has passed away in St Petersburg. My procrastination will never be the same again.

The Adventure of the Dead Servant

While England’s been faffing about with Jubilees and barges and flotillas and stuffs, someone’s been keeping their nose to the grindstone. Sir George Campbell uncovered a curious case of benefit fraud amongst his staff and came down on the culprit like a ton of bricks…

As I mentioned earlier…

In tonight’s episode, public money was grossly abused by the Ministry of Defence. The Politics Department was relegated to a luxury two-story Portakabin in a much sought-after car park by the University of Sussex. Doctor Fautsource will be performed once the Politics Department moves out, the Portakabin being the closest replication of Hell this side of Slough. BrickBreaker was played by Lord Justice Leveson. CareerBreaker was played by Robert Jay QC. Eduard Khil amused us all. Sir George Campbell MP selected the Gibraltarian national anthem as the backing for his monologue. This was an Gabrielquotes production.