We wish all of our readers a very happy new year, except those that live in Haifa who we suggest move.

“Today, we are living the future,” reads the strategic plan of the University of Sussex which – in the year 2013 – still insists that essays are handed in on paper accompanied by a carbon-copy cover sheet. Apparently the management aims “to give our students a technology-rich, flexible study space adapted to reflect new ways of learning,” eg. by having an essay deadline over a week before the start of term and not allowing electronic submission.

I’m not sure this really counts as a ‘strategy’ – it’s more like a meaningless assertion in want of a  finite verb – but perhaps our Supreme Leader OBE could turn his attention to solving the complex, real-world problem where students have to mow down trees and shell out on postage costs solely to do something that could be simply achieved with the use of a Gmail account.

Also, in case you haven’t noticed, the web-address of that BBC news article praising Sussex residents for their New Year’s Honours… appears to feature the wrong county: http://www.bbc.co.uk/news/uk-england-kent-20857098

Believe it or not, it’s been two and a half years since the General Election so Messrs. Cameron and Clegg have decided to launch a mid-term review of their government.

Interestingly, their review made no mention of pastygate, jerrygate or gategate. Nor of Adamgate I or Adamgate II. In fact, the whole thing seems to be rigged to make the Coalition drag on for the remainder of this parliament. But I can’t help wondering what an ordinary Lib Dem would have said if they was producing the review on their own. But I think it might have been this:

The new crop of Police & Crime Commissioners, to whom it has been our pride and privilege to pay millions and millions of pounds of largely undeserved wages, are finally beginning to make their mark on the face of British policing. More’s the pity.

Hertfordshire PCC David Lloyd (the Tory, not the leisure centre) has suggested that suspected criminals should be forced to pay for food and accommodation while being held in police cells. And I bet all the civil rights groups like Liberty are going to claim that this is a bad idea. Silly trendy lefty organisation: doesn’t like detention without charge, doesn’t like detention with charge.

You’d like to check out? OK, just bear with me while I fetch the Bill. Now, have you used room service at all? No? Made any outside calls? Ah yes, to your lawyer.

Did you use the minibar? What’s that? You spent the night behind minibars? No, but… I’m sorry, could you let me finish my sentence? Oh, I see, you’re about to begin your sentence.

So will that be cash, cheque or credit card, sir? Your wife’s going to pay? No problem at all, sir. Have a great day, Mr Huhne!

Sussex PCC Katy Bourne has been in office for a month and a half (ie. she has waltzed through £10,625 of value-for-salary so far) and listed on her website all of the Decisions that she has taken. There are five of them – how busy her days must have been! – so each one cost the taxpayer £2,125.

Meanwhile, Avon and Somerset PCC Sue Mountstevens hounded her Chief Constable into early retirement on her (Sue’s) first day in office, and is now being Sued in the High Court, presumably spending buckets of public money on her defence.

Keep up the good work folks!

The Big Society in action

There’s a website called FixMyStreet.com where members of the public can report problems in their area, eg. a broken street-light, to the local council electronically. (Heed this Sussex. -Ed.)

Quite a good idea really. However, in certain areas which tend to have gratuitous nicknames such as Britain’s Beverly Hills and Moscow-on-Thames, the residents seem to spend a lot of their time moaning about extremely minor issues.

For example, one serious complaint from my own Borough of Elmbridge speaks of: 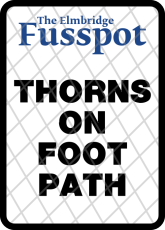 Blimey – I mean, I don’t think I can continue to live anywhere that suffers from such an ailment. And then there’s just the pointless snitching and tale-telling: 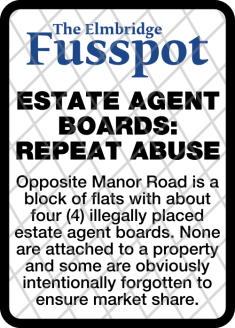 The phrase ‘get over it’ leaps to mind…

In tonight’s episode, the rainforests were destroyed by Sussex IT Services. The Lib Dem music was written by Nola Willis and arranged by Stephen York. The FixMyStreet.com complaints were submitted by a Mrs Trellis of North Weybridge. David Lloyd confused Hemel Hempsted police station with the Radisson SAS. This was an Gabrielquotes production.