BBC on the defensive over ‘student’ undercover reporter row

The managing editor of Panorama has this week denied that an undercover reporter who posed as a student in order to obtain covert footage of a secretive, totalitarian society was guilty of unethical conduct.

Veteran journalist John Sweeney spent almost nine days working amongst a group of students on the University of Sussex campus, gathering evidence of the increasingly severe restrictions on free speech imposed by the regime of Kim Johng-duffy.

Critics, however, have pointed out that if Sweeney had been exposed, the entire student group risked being fined, prosecuted or – worse – shipped off to a re-education camp.

In a prepared statement, the BBC said: “John Sweeney’s investigation was a chilling insight into life behind the Falmer Curtain. These people live with the constant knowledge that any protest – however slight – is illegal, and they even face serious penalties for wearing dissident colours such as yellow.”

“Panorama also showed how backward the Sussex campus is,” continued the spokesperson. “Its antiquated, fragile IT system rarely lasts more than a few minutes without blackout, and many public employees will simply leave their post in the middle of the day due to an utter lack of work.”

The programme’s footage contains extraordinary scenes of former leaders being worshipped long after their death: indeed, the Eternal President’s own brother unveiled a new portrait of the ruling dynasty only last year. This example of cronyism and huge expenditure on a cult of personality, at a time when the campus is in financial crisis, is said to be typical of the regime.

The University of Sussex Students’ Union condemned the BBC’s “reckless indifference” to the safety of students… we think. They’ve not actually been able to release a statement through official channels.

Note from Gabriel: reading this blog post while on campus genuinely does leave you liable to be imprisoned. As does reading it at home but then talking or thinking about it while on campus. Sorry, maybe I should have put this note at the top.

A bit of a ding-dong

At outset of a section that some people may disagree with, or at any rate more people than disagreed with the previous section, I would like to be totally honest and say how much I enjoyed reading this headline:

Yes, this is the news that Margaret Thatcher has died, and while she was a controversial figure, I do really respect her conviction etc. etc. etc. Further clichés can be found in Appendices 79-90.

In the media this week, Baroness Thatcher has received much acclaim for breaking the glass ceiling between women and 10 Downing Street. However, she actually did little to dispel traditional gender stereotypes. Indeed, her excessive love for monotonous household chores even earned her the nickname of The Iron Lady.

Readers will recall that other anti-feminist icons of the period included The Mop Lady and Windowlene Woman.

In a prepared statement, the Angel of Death said, “Gotcha!” 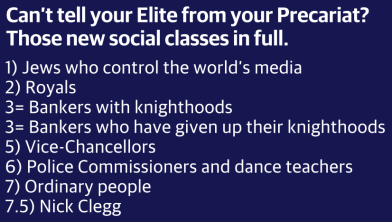 An idea that went flat

Some enterprising small business has had the idea of selling lifesize cardboard cut-outs of David Cameron on Amazon.

A similarly enterprising army of British citizens has responded with a barrage of disarmingly honest reviews. 5-star comments include: “Greatly improved my dart-throwing,” “Prospective purchasers should note that this otherwise very lifelike Cameron is actually two-dimensional (one more than the real thing),” and, “I have had to move it between my four spare bedrooms throughout the day to make sure each is occupied.”

Some buyers were less impressed however. “I actually ordered a Nick Clegg thinking it might make a nice change. David Cameron delivered in error; was told I must keep it for 5 years before changing it,” laments one purchaser.

“Within minutes of unveiling this figure near my house in Durham, a plethora of obscene graffiti was scratched into the face,” notes another 1-star review.

“A month after purchase I noticed small bits of paint peeling away. Being the inquisitive type, I carried on peeling. Once the top layer had gone I was left with the startling sight of a 12ft lizard with glowing eyes and blood dripping from its mouth,” reads a comment which was ‘rated helpful by 108 out of 108 people’.

Apprentice winner Stella English has lost her unfair dismissal case against Viglen, an IT company owned by S’ralan Sugar. The trial,which lasted for 7 days, involved 8 witnesses and over 350 pages of evidence. In a written judgement released on Friday, the Employment Tribunal said: “The claimant resigned. Therefore, there was no unfair dismissal.” Scarcely seems worth all the bundles of evidence…

However, I have reason to doubt the honesty of the judges. According to a letter published in The Jewish Chronicle this week, the Employment Tribunal is strikingly similar to “a Nazi court room,” – even though (I seem to remember) the JC gets quite angry when non-Jewish people make offensive references to the Holocaust.

The tribunal judgement which displayed the judges’ true genocidal nature seems to have been so objectionable largely because, erm, it found against someone Jewish. In a biting 45-page ruling, the panel found that the case was “an impermissible attempt to achieve a political end by litigious means.”

“It demonstrates a worrying disregard for pluralism, tolerance and freedom of expression,” the judgement continued, “and it would be very unfortunate if an exercise of this sort were ever repeated.”

What an utter embarassment for the Jewish community. You might think that the JC, which has obliquely supported the action since its beginnings, would be appropriately humiliated by this public confirmation that they’re intolerant. But no: they decided to disprove the allegation by calling people Nazis.

Stop press: the Jewish Chronicle has, this very morning, published another article. “This court case was Hitler’s legacy,” its headline announces. They can’t take a hint, can they…

Stop stop press: I’ve been asked by JC hack Marcus Dysch, author of the article referred to above, to mention the fact that the paper also ran an article quoting a lawyer who – sensibly – claimed that the case was “an act of epic folly” to begin with. I apologise if I gave the impression that the Jewish Chronicle consisted solely of offensive and often completely unnecessary Nazi references. To be fair, they are generally interspersed with other material.

A eulogy for today’s blog

NB: for the avoidance of doubt, the North Korea thing was satirical and should not be taken seriously. I obviously do not think that John Duffy is on a par with Kim Jong-un. The ‘student/investigative journalism/restriction of free speech’ convergence just meant I couldn’t help myself. Still, makes you think though, don’t it.