“I don’t know where in Europe he’s from, but we’ve either defeated him or been allied to him. The point being, he should either say ‘Sorry’ or ‘Thank you’.”
—Tom Basden

Nigel Farage gave a little speech last week in which he described how “awkward” he felt on a recent railway journey.

“I got the train the other night, it was rush hour, and it was ages before I could actually hear English being audibly spoken in the carriage.”

That’ll teach him to go InterRailing…

The Ukip leader continued: “This country, in a short space of time, has, frankly, become unrecognisable. There are parts of this nation where you only ever hear people speaking Russian.”

Oh no, wait a minute, that wasn’t Nigel Farage at all. That was the leader of Ukrip, the Ukraine Independence Party, protesting against migrants from Russia distorting their nation’s traditional values.

Although one shouldn’t joke: many are speculating that Russia’s intervention in the Ukraine would constitute a severe breach of international law, potentially even a Crimea against humanity.

Meanwhile in other party conference news, Labour MP Caroline Flint tweeted a photo of her party’s special meeting called to amend the rules on engagement with trade unions. Her picture included this man: 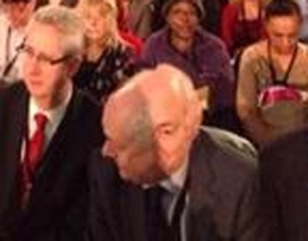 That wasn’t the only unusual appearance by a Labour Party member last week, however. Shadow useless secretary Ed Balls had an unusual way of wearing his translation headphones during Angela Merkel’s speech to Parliament: 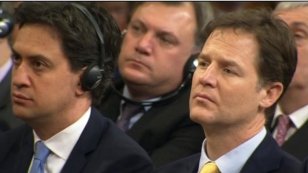 Nick Clegg, meanwhile, was taking advantage of the opportunity not to have someone whispering in his ear, subliminally forcing him to do ridiculous things.

Six months after the start of the outsourcing project and a staggering 151 days since a legally binding freedom of information deadline went by, Sussex University have finally deigned to release a copy of their contract with privatised catering service Chartwells.

Yes, this is what they call transparency. Refusing to publish over one third of the pages; redacting more than 95 separate sections; and in many cases, even withholding section titles so that we can’t even guess what might be contained within or the reasons for removing it.

Chartwells charge an inordinate amount of money for their sandwiches. And it seems that the University is determined not to give anyone any food for thought at any cost. 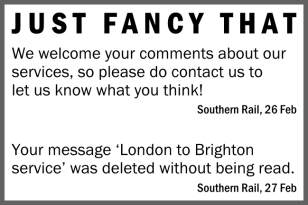 Question Time is coming to Sussex University, with all five candidates for the Brighton Pavilion parliamentary seat (Green, Conservative, Labour, Lib Dem and UKIP) attending a panel debate… moderated by yours truly. Apparently University Security will also be present, although I don’t know why; it’s not as if anything went seriously wrong last time a Tory politician came onto campus.

OK, perhaps things went a bit awry. But last time David Dimbleby was on campus, it was all a delight…

Question Time: the Future of Brighton will take place at 6pm tomorrow (Thursday 6 March) in the Jubilee lecture theatre. All welcome.

(We were going to call it ‘The Future of Brighton Pavilion’ but apparently this gave some people the impression that it would be about heritage protection for historic local buildings.)

In other news connecting UKIP and students (Nice segue. -Ed.), it appears that in forthcoming presidential election of the National Union of Students will be contested by the secretary of ‘Young Independence’, the Farage Youth.

From my experience of NUS in the past, I’d say that a far-right candidate that hangs out with people who do Nazi salutes – sorry, who imitate pot plants – is not so much a dark horse as a dead horse.

Last week’s corrupt speaker (‘Corruption speaker’, shurely? -Ed.), a detective constable from the Overseas Anti-Corruption Unit, was unable to attend “because she’s on a police operation: apparently we should all watch the news tonight to find out what.” What an excuse…

Sure enough, the news story of the 110-arrest crackdown on fake share traders materialised later in the week.

Our replacement speaker was from the newly-formed National Crime Agency, and he brought us three of the articles pictured left to look at. They featued a free-waving aerial and a cavity in the handle. There were no electric or electronic parts whatsoever.

Governments around the world apparently never bothered to examine the technology behind these devices, and spent $10,000 on each empty plastic shell, after being told that the aerial would swing and point towards any object whose photograph was inserted into the slot in the handle. So the gadgets could be used to divine not only for bombs but also for drugs, gold, oil and even – particularly unfortunately – Madeline McCann.

Then someone noticed that the success rate was rather low, and the Thai government performed an independent test with four suitcases, one of which contained a bomb. The detectors found the explosives 20% of the time. As the Thai Prime Minister said on a TV interview, “Actually, randomly guessing would get you a 25% chance.”

“The guy who sold these made a killing,” said the speaker. What a choice of idiom.

In tonight’s episode, Nigel Farage lamented the demise of good old-fashioned English racism. Sussex University became transparent, or at least translucent. Southern Rail engaged with their customers. David Dimbleby will be played by Gabriel Webber. This was an Gabrielquotes production!