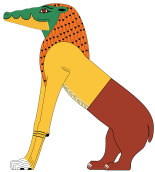 An investigation by The Guardian has revealed that those responsible for keeping the Israelites slaves in Egypt may have been part of a religious cult. “We have seen evidence that the slave-drivers worshipped an array of part-animal part-human deities who always stand side-on.”

Other Pesach news this year:

Readers may remember from last month that Sussex University recently noticed that it had accidentally paid one of its staff an extra £75,000. I speculated at the time that their reasons for asking for a repayment over several years – rather than dismissing the individual concerned and taking legal action – was about saving themselves embarassment.

Well, how wrong can you be. Because shortly after The Argus published a story about the incident, the Audit Committee paper which was my source mysteriously disappeared from the database on which I found it. Look: the series of papers runs from 1 to 10, but strangely, number 8 is missing:

How odd. I daresay it’s just a mistake, because Director of Finance Allan Spencer described the episode as an “irregularity” rather than incompetence or fraud. Since he clearly has nothing to hide and the removal of paper A/79/8 must have been an oversight, I am providing a copy here.

Readers may remember the recent refusal of Director of Student Services Claire Powrie (pictured) to respond to freedom of information requests on ridiculous non-grounds (“The University is not obliged to take into account the views of the relevant individuals [when making decisions about the handling of their personal data]”). Her reasoning was, it turns out, based on substantial legal advice.

What can have changed? Could it possibly be the fact that Sussex’s excessive legal expenditure has repeatedly been the subject of embarrassing media coverage? (Exhibit A, Exhibit B, Exhibit C, Exhibit D, Exhibit E.) I think so. The cunning devils have actually gone to the effort of entering into artificial but legally-binding confidentiality contracts to avoid having to release this information any more.

If any more proof is needed, I also asked from whom the legal advice was sought. The response: “The University is withholding this information […] If the University were to release the name of its legal advisers […] it would constitute an actionable breach of confidence.” Just think about that. An actionable breach of confidence. It is being suggested that if Sussex names its lawyers, they could sue the University. Not say, “Thank you for the free publicity and for the business we’ll now get from other large scummy universities.” Sue.

That seems just a little too convenient and implausible. So their deep commitment to transparency now involves them going to extraordinary efforts to circumvent legislation aimed at openness.

Meanwhile back at the farm, Sussex’s insistence that over 100 pages of their contract with catering nightmare Compass (a company blacklisted by the United Nations for corruption) should be withheld from publication was challenged, and the Information Commissioner found that most of the redacted information should have been released. He ordered them to publish a proper copy with only minor redactions. I’ve also managed to browbeat them into releasing their contract with facilities/ accommodation/ porter/ printing/ security provider Interserve.

Sussex tried to suppress over 100 pages. Following the challenge, the Information Commissioner ruled that they were only legally entitled to suppress eight. So they weren’t trying it on at all then

These contracts were drawn up by the University’s very expensive lawyers Pinsent Masons, who are identified by name and logo on the front page of each document. Strange that there was no breach of confidence involved in that…

I am now releasing these documents in full, exclusively on Gabrielquotes: the University of Sussex’s outsourcing contracts with caterers Chartwells, and facilities managers Interserve part 1, part 2, part 3, part 4. This newly-released material, especially the Interserve documents, frankly contains some dynamite revelations including:

As you will see if you download these documents, there are hundreds and hundreds of pages and I’ve only had time to look through a couple of them. Anyone who wishes to help wade through the material and find the interesting/scandalous bits should definitely get in touch!

I’m going to be well proud to be a Sussex alumnus.

The late Maria Miller gave MPs a heartfelt apology for overclaiming expenses and obstructing Parliamentary authorities’ investigation. Her apology lasted a good 30 seconds, so that’s alright then. Or not, because the leader of the Labour Party called for and eventually got her resignation. (My greatest achievement. -Ed) (That’s funny. -Ed.)

However, what hadn’t come out at the time was the protection racket being run by Miller’s special advisor Joanna Hindley. When a Telegraph journalist contacted Hindley to ask about the £5,800 discrepancy (Irregularity. -Allan.) in the MP’s expenses, they were told:

“Maria is obviously been having quite a lot of editors’ meetings around [press regulation post-]Leveson at the moment. So I am just going to flag up that connection for you to think about.”

Or in other words:

Her role has now been split: the Culture and ‘Equalities’ (why is that now a plural?) portfolios have gone to Sajid Javid, while the new Minister for Women will be Nicky Morgan – who, in her role as a representative for empowered British women, will be answerable to Sajid Javid, a Man. She’ll have to ask his permission before making press statements, releasing policy papers, going out to dinner on a work night etc.

Good old enlightened David Cameron! Still, we can’t say that his party is entirely institutionally sexist, so let’s pass over to…

I’m sure the fifth question on everybody’s mind is: what am we going to do on that long, endless, boring Pesach bank holiday weekend? Well, with the best TV and radio listings around, Gabrielquotes can present the Pesach Radio Times.

Our blog post is now completed: we have read the text, satirised Police & Crime Commissioners and antagonised Michael Farthing. Let us be thankful that we have done so in freedom and safety, and let us pray for the Internet of the future, when all humanity will share information and ideas in harmony and peace.

Next year in Falmer! Next year for a campus redeemed!

Gabrielquotes would like to wish all readers a joyful Pesach, the very best of luck with dissertations/revision/job-seeking and a wonderful year to come.