If you want to follow this blog before the inevitable injunction, the box in which to do so is on your right.
.

My revelation last week that Sussex University bosses have contracted Interserve to use secret lapel cameras to spy on students unlawfully caused a bit of a rumpus, as did the revelation that security contractors are required to suppress anything approximating a protest. No, I haven’t lapsed into wittering about ancient Egypt again, this is a modern-day higher education institution we’re talking about.

The University press office went all out in its quest to help journalists discover the truth:

In relation to the lapel cameras, they said: “Use of body cameras for security staff aids their personal security.” Now this is interesting. Spokesperson Hakner is obviously right to say that Sussex’s security guards are small, diminutive people who couldn’t possibly take care of themselves if subjected to physical challenge…

…but one wonders how it is that they aren’t adequately protected by the fixed CCTV system on which the rest of us have to rely. Surely the University can’t be admitting that we’re all unsafe on campus? How strange. (They also forgot to answer the question about why the lapel cameras aren’t included on their legally-required CCTV notification signs.)

I’ve also had more time to pore over the outsourcing documents released last week. They’re written in some of the most impenetrable English I’ve ever come across, requiring frequent trips to the several chapters of ‘definitions’ to be comprehended. But it’s good fun; where else would one find a requirement that cheese be “fit for purpose”? (Sadly no mention of Vice-Chancellors being fit for purpose.) Where else is ‘going bust’ pleasantly referred to as “an Insolvency Event”? And what other University has the opportunity to host ‘Disaster Declaration Discussions’?

The contract dedicated a good three of its 1,100+ pages to “anti-bribery provisions”. Interserve was asked to guarantee that it had not been found guilty, within the last six years, of any offence “involving bribery, corruption, fraud or dishonesty”. (Lucky there was no mention of health and safety offences or they might have had to mention their conviction for exposing workers to toxic asbestos.)

Interserve also had to guarantee that it had not, within the last six years, “been the subject of any investigation, inquiry or enforcement proceedings by any governmental, administrative or regulatory body under any bribery legislation”.

This is also intriguing. Sussex’s proud lawyers Pinsent Masons, who drew up the contract, clearly intended these provisions to serve as a background check on the people they were dealing with. But why were they interested in “bribery, corruption, fraud or dishonesty” – four different areas of law – in relation to criminal offences, but only “bribery” in relation to regulatory investigations? It’s certainly an unfortunate accidental omission, because if Interserve had been asked to declare any regulatory investigations over fraud and dishonesty then their £11m Office of Fair Trading fine for illegal bid-rigging might have arisen as a topic of conversation.

And we wouldn’t want that, would we.

Meanwhile, the battle between universities and unions rages on, with the threatened assessment-marking boycott potentially going to delay my graduation, which would be a tragedy, because I’m really looking forward to paying £100 for the privilege of wearing 18th-century clothing and shaking hands with a Vice-Chancellor I despise.

Putting the ‘rat’ back into ‘irrationality’

Justice secretary Chris ‘we don’t take bookings’ Grayling, our exalted “minister of justice and dispenser of none”, has written another one of his ‘please pity me’ articles about judicial review in The Telegraph. Once again, his main argument seems to be that he sometimes loses court cases so clearly they must be a bad thing because he Represents The Public.

(The fact that he was elected in the context of a democratic society espousing the rule of law, in which politicans are not actually free to do literally whatever they want, has apparently not occurred to him.)

Anyway, for the benefit of those readers who have English as a first language, I have translated Grayling’s Telegraph article into an intelligible format and you can read it here.

We’ve had lots of letters

The letters page of The Jewish Chronicle featured a particularly fine selection of fruitcakes and loonies last week. Seemingly none of them realised how ridiculous they sound.

One man, from “London NW6” (shock) wrote, “One cannot ‘illegally’ occupy land that one owns, as in the case of Judea and Samaria, where sovereignty is unambiguously vested in the Jewish people.”

Yes, and that lack of ambiguity no doubt accounts for the overwhelming global consensus on the political status of the West Bank.

The most UKIP-like letter, though, came from London N3 and argued against women being allowed to take on roles of leadership within the Jewish community.

Its author said: “In ancient Egypt, Israelite women were proactive in ways that were appropriate. If they had aggressively and stridently pushed to have the same role as men, would our people have been redeemed at all?”

How right can you be? Miriam provided a perfect example of a docile female figure who just stayed in the background, kept quiet and never tried to assume any form of leadership role.

It would have been awful if women had attempted to turn the slaves’ Exodus from Egypt into a civil rights struggle. It is plain for all to see that God would not have freed the Israelites from Pharoah if they had been, erm, trying to win their freedom.

What could be next? 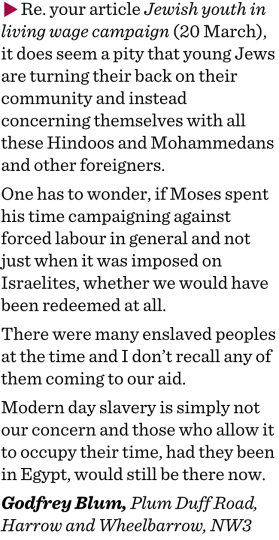 Or shall we stick to a sensible, universalistic interpretation of Jewish values instead? Yes? Good.

An intriguing section of Sussex’s contract with caterers Chartwells requires that all cheese used be “fit for purpose” (sadly there isn’t a requirement that all Vice-Chancellors used be fit for purpose). Slightly concerning that something so seemingly obvious had to be specified, no?

But suddenly Chartwells’ cheapo cheese isn’t the only unsavoury material we need to worry about, because Home Office minister James Brokenshire accidentally let slip in an interview with the Financial Times that UK internet providers are being asked by the government to filter out material “that may not be illegal but certainly is unsavoury”.

This is part of the government’s long-standing agenda to protect global human rights by repealing the Human Rights Act, making it more difficult for people to challenge unlawful government policies and – now – deciding what online content is and is not ‘savoury’ for us humble serfs (‘Serfers’, shurely? -Ed.) to view.

The Conservative Party has already made its own website a model of crispy, saline savouriness by deleting all of its pre-election pledges from public availability. This was necessary because if we were able to compare the government’s track record against the things that David Cameron promised, it might be bad for morale which is bad for Britain. 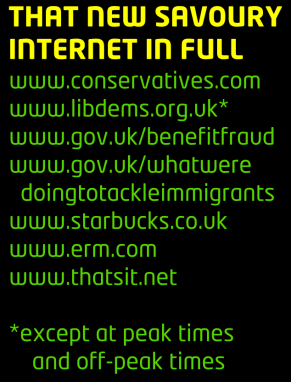 No, not St George’s Day. At some unspecified date in the next week or so it will be the 190th birthday of my good friend Sir George Campbell MP. We wish him many happy returns and he has this short statement to make:

Gabrielquotes is looking for appropriately comical captions to this screenshot in which m’blog about the University hospitality register got Sussex’s Senior Communications Officer Alison Field into a lather:

Eg. At least he’s not found out about the Vice-Chancellor’s second home yet!

Oh yeah, and I’ve got a job! Exciting times.

In tonight’s episode, Sussex’s press office stuck rigidly to the facts. The UCU marking boycott is being organised by general-secretary Sally Hunt and her brother Jeremy *. Chris Grayling wrote drivel because he hasn’t been exposed to books recently. The reputation of the Jewish community was enhanced enormously by God-free Bloom. James Brokenshire declared this blog to be unsavoury. Sir George has made yet another of his many happy returns to this blog. This was an Gabrielquotes production!