Buried deep on the BBC website last week, underneath a story about the Royal baby, was the insignificant piece of information that the Royal Air Force had intercepted two Russian bombers heading for UK airspace.

According to a so-called defence expert, “The Russians often fly near British airspace to test response times.” What are they like! Oh those Russians. Such teases.

However, getting the RAF to co-operate with these hoaxes might be almost as difficult as persuading children to take obvious fire drills seriously…

“People should be able to dislike homosexuality like they do different types of tea.” Guess who said this? Hint, it’s predictable.

Yes, this is the breaking, headline news that a UKIP Member of the European Parliament has made a bigoted remark disguised as charmingly eccentric Britishness. The guilty party, Roger Helmer – MEP for the East Midlands region – told journalists, “Some people find homosexuality distasteful if not viscerally repugnant. Different people may have different tastes. You may tell me that you don’t like Earl Grey. That may be a minority view but you are entitled not to like it if you don’t like it.”

Helmer defended himself by blaming a media “feeding frenzy against UKIP”, because it’s obviously their fault he said any of this.

He apparently doesn’t realise that just because one doesn’t like a particular type of tea doesn’t mean that nobody else should be allowed to drink it, a point seized upon by The Sun in their reaction piece. But there are certain problems with them responding at all:

The scandal joins a significant list of UKIPian remarks to hit the media over the last few days. One of their candidates, William Henwood, tweeted that Lenny Henry should “go and live in a black country”, though why deporting ethnic minorities to the towns of Dudley, Sandwell and Walsall was considered a sensible idea is entirely beyond me.

The party’s deputy chairman Neil Hamilton told journos UKIP is perfectly suited to “decent” supporters of the BNP. You know, the decent fascists; the ones whose only motive in sending immigrants back to ‘black countries’ is to reunite them with their friends.

Conservative councillor Terry Wilkins (pictured) has stopped using the title ‘MBE’ after Palace officials gently reminded him that he had never been so honoured.

According to The Telegraph, he claimed that throughout his two decades of describing himself on stationery, emails and the Cornwall Council website as a Member of the Order of the British Empire, he had been victim to “an elaborate and malicious hoax”.

He said that he’d been sent “the medal” and an invitation to Buckingham Palace in the post in 1995, but did not attended the formal investiture ceremony due to being “embarrassed”.

One might think that he’d be a little embarrassed now, but apparently not. “In a way I am relieved because it takes a lot of pressure off me at certain functions,” he told journalists. (Social functions like his trips to the local children’s playground, presumably.)

There is an interesting postscript to this story of poor, innocent Cllr Wilkins having been maliciously deceived into believing that he had received an honour:

He also claimed he held an Open University degree in social science, but the institution said it had no record of any students with that name. Mr Wilkins refused to comment on the matter.

The change, presumably, reflected the fact that although the fake, West Bank-style eviction notices were served on Jewish students, they were also served on non-Jewish students. In fact, they were served on students generally, some of whom just happened to be Jewish. (One then wonders why the admittedly unhelpful stunt “raised cries of anti-Semitism”…)

The headline rather reminds me of my favourite ever Jewish Chronicle story, and this is genuinely a direct quotation: 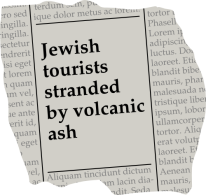 Other beautifully self-centred stories in the same vein, as made up by me, include:

In tonight’s episode, the Russians came to Britain bringing peace, goodwill and a good old security drill. The Jews were singled out by an Icelandic volcano. UKIP is doing well in the polls except amongst Poles; with special thanks to Olivia L for the ‘Earl Gay’ comment. The shaggy dog of a Tory was played by Terry Wilkins . This was an Gabrielquotes production!