This time yesterday I was stylishly ensconced in:

A gown of black cloth, with a cut-away collar and a yoke rounded at the bottom, the gown being pleated round this yoke. The sleeves to be bell-sleeves of moderate length with very sharply pointed ends, with a wide but not long vertical opening halfway down their length for the passage of the arms; a hood: black outer self lined and face inside fully lined in scarlet satin. Plain black neck band that is self lined black; and a hat: a black square cap (mortarboard).

I particularly like the stipulation that the sleeves should have an “opening […] for the passage of the arms”: so a bit like, er, sleeves.

This is the costumery which the University of Sussex, founded in the 1960s, has decided to adopt for graduation ceremonies, according to its Regulation on Academical [sic] Dress. Still, I should count myself lucky that I’m not the Vice-Chancellor (as if), or else I’d have to wear all of the above, plus gold braiding, plus a “high and upstanding collar” – presumably to make up for the lack of a high and upstanding personality.

I would also be preceded by a mace, a medieval symbol of power fashioned out of precious metals which concrete, 1960s Sussex has purchased for no obvious reason.

The Registrar & Secretary, meanwhile, rather worryingly carries a sword of office and wears a “black velvet pileus, with silver button” on his head.

Of course, those in the black pilei – with or without silver buttons – work desparately hard on the stage, shaking hundreds of hands and being glad to see the back of those filing past them (“Finally we’re rid of that last generation of cheapskates that only pays £3,000 a year!”).

But there was one absence that marred an otherwise perfect[ly pointless] day: though the public relations squirming it caused the University more than made up for it.

The bad news was that the honorary Chancellor of the University of Sussex, actor Sanjeev ‘being silly and acting up’ Bhaskar, was unable to attend because he was away filming Doctor Who – which to be fair is a relatively good excuse, not that the University would accept it for late coursework.

However, good old Sussex was able to secure a worthy replacement. Vice-Chancellor Michael Farthing commented in a press statement that he “can think of no-one better” to stand in for award-winning comedian and all-round good sort Bhaskar than… Chris Brodie, chair of the Student Loans Company, latterly of UBS Investment Bank.

The SLC was in trouble last week when it emerged that it had been using Wonga-style tactics (letters from fictional law firms) to intimidate debtors into paying up promptly. Brodie, though, is said to be driving through reforms of the organisation. From now on they will no longer send out threatening letters, instead relying on on locally-sourced thugs, blackmail and kneecapping.

However, following pressure from the Students’ Union – which the official University press release described as “consultation with students”, it being a Sussex tradition to consult with students only after a decision has been taken – Chris Brodie was stood down and, controversially, academics presided at the graduation instead.

Another thing the press release forgot to mention was that Brodie had offered his resignation as SLC chair the week before due to the whole Wonga tactics scandal. But I’m sure that embarassment played no part in the decision-making process.

My parting gift to the University was an article printed in The Brighton Argus on graduation day itself. It quoted me expressing my dissatisfaction ahead of Farthing’s quote defending himself. Tremendous.

The ceremony: lies and statistics

He also observed that Brighton is “among the coolest cities in Britain” (gosh isn’t he down with the groove) and expressed a hope that us graduates – as we were by that point – would go forth into the world and take with us “our values of freedom and tolerance”.

Pity his salary package doesn’t include a complimentary sense of irony really.

In between his droning and the hundreds of students trooping past to shake hands with the Head of School – we were all issued with hand sanitiser just before going on-stage as apparently we constitute Sweaty Masses – some honorary degrees were presented, one of which went to Dame Jil Matheson, former National Statistician. Shereceived her damehood earlier this year “for services to government statistics” which is a curiously Yes Minister phrase; ‘What do you do?’ ‘I service statistics’.

Jil told us that in her days as a Sussex undergraduate she had “challenged the then Vice-Chancellor about the suspicion that he was keeping secret files on students”.

As if that sort of thing would happen these days! Still, it’s a comforting thought that you can be a pain in your youth and still get invited back for an honorary degree decades later.

This prospect is particularly exciting for me as I would love to look like airport ground staff in front of a large group of people (see photo).

They also gave me a free “I Love Sussex” mug. That made the entire £10,000 degree worthwhile.

But enough about all the top nobs (Spelling error? -Ed.) on stage. The more junior employees who police the graduation ceremony will be busy in another part of Brighton: the University is paying for them to take a lunch break mid-way through graduation day at a very nice restaurant across the road. They had to choose their dishes in advance from this menu:

None of your Chartwells rubbish here; but I’m glad the £100 that the graduation costs is going towards such a good cause. (“Warning: contains pine kernels” has to be the most middle-class health advisory I’ve ever seen.)

Back in January this blog published a leaked document from the Association of Police & Crime Commissioners in which they surveyed their members to ask, “Are you paid too much?” (literally) as part of their submission to the government on how much PCCs should be paid.

Well, the responses to the survey have now been released and – astonishingly – out of the 23 respondents, not one said they were paid too much: and actually, 11 said they were not paid enough! Nobody could have predicted that and, of course, people griping that they’re underpaid is exactly the sort of evidence-based argument that the Senior Salaries Review Body wants to hear. 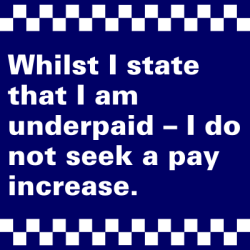 My Lord, how noble! “I am just going outside and I may be some time” and all the rest of it.

A staggering 84% of PCCs agreed that their expenses regime was not generous enough (this is the expenses regime that allows claims for chauffeurs and Mercedes cars) and one Commissioner even wrote in to complain that can claim for public transport but not taxis. Heartbreaking. 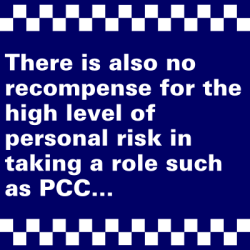 By jove this sounds intriguing! Are PCCs stalked by drug barons? Do they have to change address every six months to avoid being hunted down by disgruntled senior police officers? Has the Home Secretary finally introduced targeted assassinations for public-funded parasites? The statement continues… 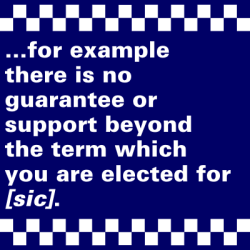 Awwwww. I hate it when a democracy doesn’t keep politicians on the public payroll after they’ve been voted out.

Are they? Do Ministers of State really have to take fewer than 40 decisions per year and manage 5-20 staff?

More to the point, is it really appropriate that PCCs arbitrarily decide what their job is ‘equivalent’ to and then demand to be paid accordingly? I mean, why stop at Minister of State? Why not… 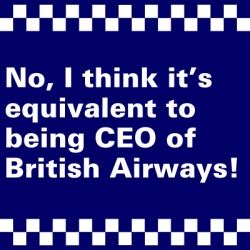 The word ‘no’ springs to mind.

In other PCC news, a number of my Machiavellian colleagues and I set up, on Friday morning last week, a Twitter account purporting to be that of Sussex’s glamorous Police Commissioner Katy Bourne. It was a bit of an experiment. Our fake Twitter account tweeted content such as:

Hoping Rolf Harris gets sent to Lewes Prison; the area could really do with a bit of showbiz razzmatazz.

Fairly realistic, I’m sure you’ll agree. No? You don’t agree? Well, a number of other people did. Within the first 48 hours of its genesis, the ‘Sussex PCC’ Twitter account was followed by:

To be fair, though, I wouldn’t expect the National Crime Agency to know, erm, anything about online security…

Disgraced former member of the human race Andy Coulson has revealed to the Old Bailey his mitigation to the charge of ’phone hacking, and why he shouldn’t receive a lengthy prison sentence:

Perhaps the most salient factor is that no one at News of the World realised that interception of voicemail messages was illegal.

Yep. He didn’t realise that it would be illegal to tap into other people’s voicemails, which is no doubt why he spent so long trying to conceal his actions and pled not guilty at trial to conduct he thought was perfectly acceptable.

After he left News of the World in 2007, Coulson went on to be a trustworthy and straightforward director of communications for David Cameron.

He’s on a losing wicket there. He was a spin doctor, so he can’t possibly have been straightforward; and working for David Cameron rules out ‘trustworthy’.

The judge definitely didn’t give Coulson full marks for effort. He sent him away for 18 months. See you later Andy!

That’s all for now

That’s it for this year’s graduation special – but keep following, because there are still exciting Sussex developments to come. And meanwhile, Gabrielquotes wishes all its readers an enjoyable summer break!