Email address in the box on the right, there’s a good chap.
.

What they omitted to mention was that the ‘ban’ extended only to a one-off two-hour event held outside the Stoke-on-Trent venue’s regular opening times, aimed at Muslim women.

Obviously it’s scandalous for service providers in a democracy to seek to include people from all faith groups, so the Daily Express’ outrage was amply justified.

One comment on the Daily Mail website said: “It’s discrimination. If the pool banned gay people everyone would be up in arms about it.” Well, actually I suspect the person who wrote that comment probably wouldn’t, but it also didn’t seem like an entirely fair comparison.

However, let nobody say this is just a trendy lefty website that stifles alternative views with all the censorial power of a totalitarian state (I did actually receive a complaint along those lines last month, from a Mrs Trellis of North Salford. -Ed.).

For that reason, please find below an audio message from one of the English Defence League activists who is angry about Stoke-on-Trent’s Muslim inclusion scandal: 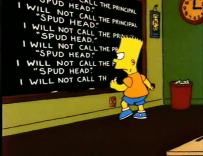 Education secretary Nicky Morgan – who recently embarassed herself by congratulating Ireland for adopting equal marriage despite voting against it in England – has appointed a classroom behaviour tzar to clamp down on silliness in schools.

This senior central government appointment by a Cabinet minister will respond to some of the more serious problems facing Britain, such as children “making silly comments and passing notes around class”.

The lucky tzar, former bouncer Tom Bennett, is “the latest in a string of behaviour gurus brought in by governments” – but none of them have been especially successful in their brief of stopping low-level disruption…

Sussex Center for [the Study of] Corruption

Keith Vaz MP appears to have got quite the wrong idea of Professor Hough’s corruption course. He’s been exposed for trying to pull favours with the Sussex University management to get a pal of his a place to study there.

However, Gabrielquotes has conveniently managed to obtain a copy of the lucky pal’s UCAS statement explaining why they wanted to study at Falmer’s august seat of learning:

An island in the Hebrides has been left highland reeling by its first recorded thefts in decades, as some sweets were stolen from the village shop, followed – the very next day – by some shower gel from a beauty store.

Reports described the community, which suffered its last serious crime in 1968 (the theft of a wooden plate), as “in turmoil” over the “crimewave”. Kind of gives a new meaning to the term ‘petty theft’ really.

Police are looking for a criminal with a splinter in their stomach, a pleasant smell and a sugar high.

Judy Mozes (pictured), wife of Israeli deputy Prime Minister Silvan Shalom, has been in trouble this week for tweeting a racist remark about President Obama.

“Do you know what Obama coffee is? Black and weak,” she told her followers.

In a rather half-hearted apology later that day, she explained that she hadn’t actually been racist herself as she’d merely been repeating “a stupid joke somebody told me”. Because intentionally repeating hate speech is, as we know, absolutely fine.

BBC staff have been roundly criticised for using a distasteful website called MyInternSwap to offer internships to the children of other middle-class families in exchange for their parents likewise offering internships, in KPMG or Pinsent Masons or whatever other glitzy workplace they inhabit.

But if the website is distasteful, what is staggeringly distasteful is its “orphan scheme”. This facility, presented as the operator’s lefty social mobility corporate-socially-responsible side, “allow[s] larger employers to offer placements for teenagers whose parents cannot provide placements in return.”

Oliver said, somewhat alarmed at his own temerity: “Please, sir, I want an internshp at PriceWaterhouseCoopers.”

The website operator aimed a blow at Oliver’s head with the ladle. He rushed to see his board. “I beg your pardon, sir! Oliver Twist has asked for an internship at PriceWaterhouseCoopers!”

There was a general start. Horror was depicted on every countenance.

“At PriceWaterhouseCoopers!” said the chairman. “Do I understand that he asked for this internship, even though he has no parents to offer one in return?”

“He did sir!” replied the operator.

Nobody controverted the prophetic gentleman’s opinion.

In tonight’s episode, Stoke-on-Trent’s WaterWorld came under fire, air and earth. John F Kennedy was shot on iPhone 6, and the Classroom Behaviour Tzar was appointed by Nicky Morgan. The odious politicking so-and-so was played by Keith Vaz and/ or Michael Farthing. Silvan Shalom was humiliated by his wife Judy Mozes. And we Canna believe that a highland island has fallen victim to theft three times in fifty years. This was an Gabrielquotes production!