After the last month, you  might be forgiven for supposing that the guilty name is that of Ken Livingstone, or Naz Shah, or Malia Bouattia, or Boaty McBoatface.

But in fact, according to staff at Sussex University, it’s me. According to an internal email sent following a judge ruling in my favour and against the university as part of a Freedom of Information Act appeal, this was the official reaction in Sussex House that morning:

So there you have it. Troublemaker-in-Chief. A name to strike fear. What an honour.

And in other news…

The country was rocked last Thursday with the breaking news that former London mayor Ken Livingstone (pictured, left, in characteristic ‘stupid’ pose) is an anti-Semite.

Ken, who has previously compared a Jewish journalist to “a concentration camp guard” and warmly welcomed to the city known anti-Semitic extremist Yusuf al-Qaradawi, finally went too far when he claimed that Naz Shah’s remarks the day before were nothing more than “very rude” and added:

Let’s remember when Hitler won his election in 1932, his policy then was that Jews should be moved to Israel. He was supporting Zionism

He was eventually suspended from the Labour Party pending investigation. Meanwhile, fellow Labour member John Mann was, not unreasonably, reminded that when calling out those who incite hatred, screaming and swearing in their faces is not really the best method.

Anyway, while Ken waits around for the final edict of expulsion to arrive, he’s found the time to write Gabrielquotes a wee song exploring his views on Nazism, Zionism and anti-Semitism:

No platform for old men

For some time, the National Union of Students has had a no-platform policy, banning certain individuals and organisations from speaking under its auspices, typically on the grounds that they incite hatred. Notable ‘no-platformed’ groups include the BNP, the EDL and Malia Bouattia’s Holocaust-denying friends from MPAC.

But in recent weeks they’ve been concerned that this policy is an illegal restriction on free speech. They approached a senior barrister, and, according to The Tab (whose journalism I trust almost as much as the Jewish Chronicle):

And, says Christopher McCall QC, no-platform policies “are legal only if applied to members of proscribed groups such as terrorists”. This suggests that the bans on MPAC and co., while possibly morally justified, are actually illegal.

A spokesperson for the National Union of Students said that, having received this legal opinon from an iminent QC, the organisation could see “no reason” to change its policy.

UKIP if you want to

There’s a terrific slate of UKIP candidates standing in my local council area, and they’ve been enthusiastically (and somewhat optimistically) leafletting me for over a week. My own ward’s candidate is Redvers Cunningham, who sounds like a species of large Canadian tree. And he’s joined by:

Bernard Collington (Claygate) is pleased at how “voters are beginning to understand that the British are the best people to govern Britain”.

Simon Kadwill (Burwood Park) went for a proof-by-assertion with: “UKIP has the best policies for local government”.

Ritchard Atkins (Stoke D’Abernon) couldn’t come up with anything better than: “I have been an active member of St Andrew’s Church Oxshott for over 40 years” – oh yeah, so I definitely trust him to run council services competently and efficiently then, if he has Jesus on his side.

But his fellow Stoke D’abernon candidate Philip Birch has the best slogan of all:

I am a prison officer. My wife is Estonian and I love Europe, but not the European Union.

The fact that she’s only allowed to live here at all thanks to the EU is, apparently, of no import.

Meanwhile in the election for Police and Crime Commissioner, UKIP’s Julia Searle (pictured left, incongruously) distributed a mocked-up newspaper, The Surrey Out Post, to householders in the area.

Now, if I were making a proper mocked-up newspaper, I’d find something more compelling to put on the front page than, “Diane James MEP says Julia Searle will do a brilliant job” (we must bear in mind that Diane James MEP is, er, also a UKIP member so hardly likely to endorse, say, Harriet Harman in this regard). But that was Julia’s choice, and she deserves credit for having the courage to follow her instincts.

She deserves less credit, and more investigation by the Electoral Commission, for devoting a third of a page to an article about how “a large part of the money Britain sends to the EU is wasted in mismanagement and fraud”.

Given that this ‘newspaper’ was produced – and the cost of its publication budgeted – for the PCC election and not the EU referendum, one wonders how general anti-Europe ravings are relevant to the post of Police and Crime Commissioner for Surrey.

The voting continues… but hopefully not for UKIP. 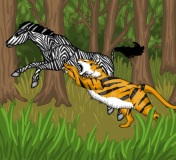 Visitors to a Norwegian zoo last week were scandalised when they saw some tigers eating a zebra carcass.

One witness said that it was “a little macabre” (alongside the photo they posted on Twitter), others describing the scene as “horrid“ and “traumatic”.

I know animals eat animals, but I did not think I would see that at the zoo.

Frankly, this reminds me of the classic complaint once received by Thomas Cook about a package holiday: “No one told us there would be fish in the sea. The children were startled.”

OK, I appreciate that these Norwegian rubberneckers may not have wanted to see a tiger tucking into a nice dish of zebra lasagne, but they all knew perfectly well that tigers eat other wild animals.

They can’t have expected to turn up to the tiger enclosure and see them all nibbling kale chips and tofu.

And actually, most of the zoo’s visitors were no doubt planning to go straight home and feed their children cod and pork and elk and reindeer and other such dainties. And yet they begrudge the tiger the privilege of eating its own traditional dishes, because when they go to gawp at it in a cage, they’d rather fondly imagine it to be living some fictionalised Jungle Book lifestyle as pictured on the front of a box of Frosties.

If their outrage was about something more reasonable – say, if the tigers had drunk all the water in the tap – that would be altogether different. But as it is, ‘I didn’t want to be forced voluntarily to see a tiger taking in nutrition’ has to rank as a uniquely objectionable complaint and I don’t think it should be given the oxygen of publicity.

Well, as the press officer of time has fear struck into their heart by the name of destiny, and the student leader of fate no-platforms the JSoc of eternity, it seems to be the end of the blog post.