Rail companies spent last week trying to defend their use of meaningless phrases such as “any permitted route” and “anytime R” after a report by regulators criticising the practice as confusing.

But one thing for which all the providers were praised was their commitment to tell passengers the reasons for delays. By happy coincidence, Transport for London recently released a compilation of all their pre-recorded announcements for the London Overground, and it contained a folder called ‘Reasons’ brimming forth with 162 detailed excuses for train delays. Gems included:

…and in case the preceding 150+ reasons weren’t comprehensive enough…

But anyway, I joined all the announcements together and made them into a rap:

Well, as the summer fails to appear, it’s well and truly Inquiry Season here in the UK. This month we’ll see the report of the Chakrabarti Inquiry into anti-Semitism in the Labour Party, launched in April. Next month we’ll see the publication of the Chilcot Inquiry into the Iraq War, launched in 2009. One of these days we might even see the second ‘module’ of the Leveson Inquiry, which has the working title Leveson II: Return of the Jay.

Shami ‘Leather’ Chakrabarti will release her speedy report online; Sir John ‘Slow and Steady’ Chilcot will release his on a stone tablet in Latin.

In fact, Shami’s inquiry, which also covers hate speech on social media, has an altogether technological, hip feel to it:

Last month, Cincinnati Zoo shot a gorilla dead to save the life of a toddler who crawled into its cage. The toddler’s mother is now fending off abuse from the public who seem to take the completely irrational, unreasonable view that it was her responsiblity to look after her child and to stop him, er, ending up sharing a cage with dangerous animals in a zoo. Someone even made the outrageous assertion that “zoos aren’t your babysitter”.

Of course though, the internet being the internet, people naturally went too far the other way, for example when one man opined: “That animal is more important than your s**t kid.”

So the zoo was trigger-happy and the mother negligent; the toddler disobedient and the online baying mob ochlocratic.

The only person to come out of the whole, sorry affair with any credit at all was Harambe the gorilla. RIP. 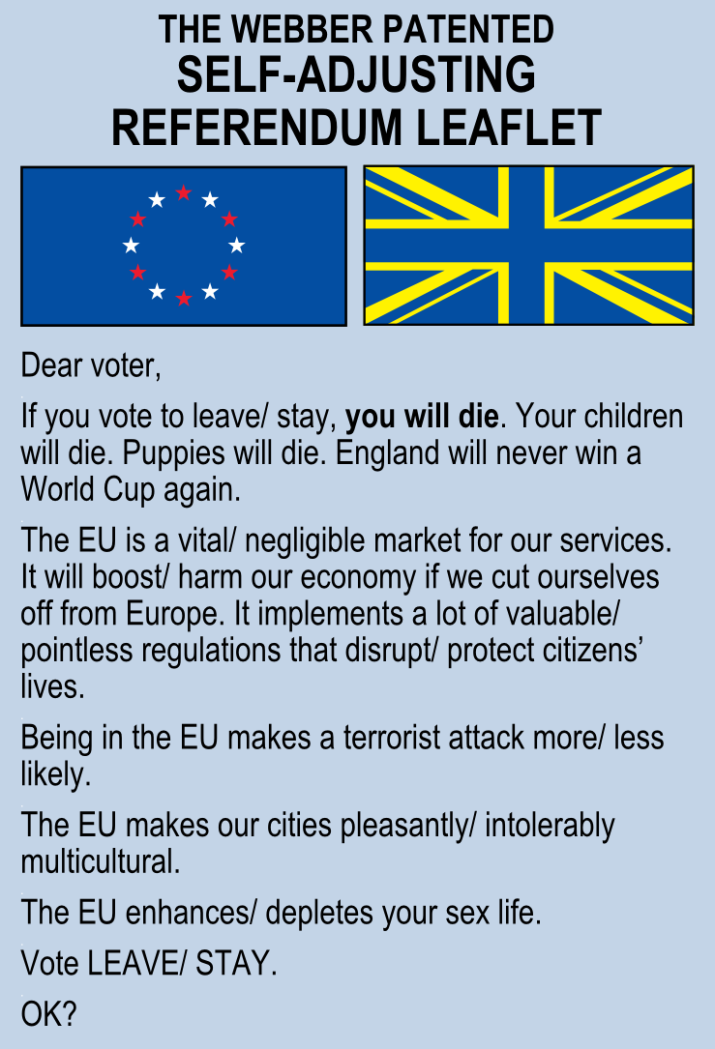 Astounding news, meanwhile, as it turned out that people who didn’t register to vote until immediately before the midnight deadline were faced with a technical error that prevented them from registering to vote.

“I had no idea that a last-minute surge of registrations would lead to the website crashing,” said one disappointed would-be voter. “I thought that 11:58pm would be a really quiet period because everyone would be watching re-runs of Pointless on Dave.”

In the past I’ve mocked up letters to the Jewish media like this as satire. But sadly Martin and Anna Kaczynski genuinely wrote this to the Jewish News: 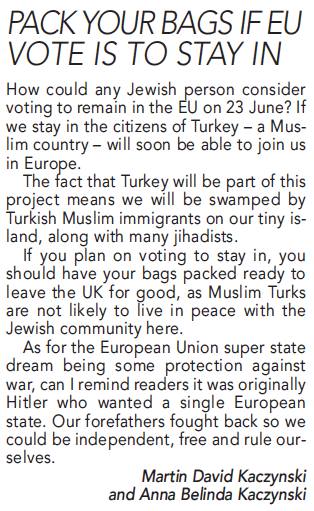 I have no words. Except these:

Dear editor
Re. the Kaczynskis’ letter ‘Pack your bags if EU vote is to stay in’, I am unsure whether I am more offended by their xenophobia, by their Nazi comparisons or by their complete ignorance of the constitutional structure of the EU.
As to the latter point, the UK has an absolute veto to the accession of any new member state (including Turkey).
As to the former points, just imagine if anyone wrote to the ‘Guardian’ expressing a fear about being ‘swamped by Jews’. Targeting other ethnic and religious groups and generalising them as extremists is unacceptable and un-Jewish.
And as to their argument that the EU is a fulfilment of Hitler’s dream: I don’t know which bit of the EU Hitler would have liked most… the Charter of Fundamental Rights, the gender and racial equality legislation, the democratically elected parliament… he’d be spoilt for choice. What a ridiculous comparison.
Gabriel Webber
Representative of Liberal Judaism on the Board of Deputies
(writing in a personal capacity)

Well, as the zookeeper of fate shoots the gorilla of eternity, and the mother of time sacrifices the toddler of destiny, we see that it’s the end of the blog post.

In tonight’s episode, the Macarena was sung by Shami Chakrabarti, and Martin David Kaczynski and Anna Belinda Kaczynski (no relation) warned against the dangers of the EU. Sir John Chilcot inquired. Sir Topham Hatt announced. This was an Gabrielquotes production!