When Donald Trump first tweeted that he thought Nigel Farage would be a good British Ambassador to Washington, we all assumed it was a joke. Including Nigel Farage, who told journalists:

I don’t think I will be the ambassadorial type. Whatever talents or flaws I have got I don’t think diplomacy is at the top of my list of skills.

But as soon as the Prime Minister agreed with him, and said that she also didn’t think he was the ambassadorial type and didn’t have diplomacy at the top of his (fairly short) list of skills, he changed his mind, very diplomatically stating in an interview [disclaimer: link to anti-Semitic website] that his appointment would be “best for the country” and he was only being passed over for the role due to “the cesspit of politics”.

Twitter reacted in its own inimitable way with a #BetterAmbassadorsThanFarage meme, with suggestions including a peanut, a London bus, Baldrick and “just not having an ambassador”.

But before the cesspit of politics makes its final decision, we have a message for you, Ambassador Nigel:

Well that was fun.

You’d all forgotten that Downing Street and I have a date in the High Court, hadn’t you! It seems like a ridiculously long time since a judge ruled in my favour that details of the £115,000-a-year expenses paid to all former Prime Ministers should be published. But since then, there have been questions in Parliament, letters from Cabinet ministers and more front-page scoops.

Meanwhile, the legal wheels have kept on turning.

The Cabinet Office, the government department that deals with all things Prime Ministerial, didn’t take part in the original case due to an “administrative oversight”, but since losing it in their absence they’ve cried foul – and also played foul.

First, they asked the judge to ban me from revealing that I’d won. The judge declined.

Then, when that failed, they tried to get the decision overturned and the whole process restarted, because it was all well unfair due to the “procedural irregularity” of their having, er, forgotten to instruct lawyers. (Their failure to get involved really was a sorry ‘my dog ate my homework’ saga, described in a witness statement that they asked the judge to keep secret on the somewhat patronising grounds that it “will not assist Mr Webber’s case”, although the judge – a senior one with the wonderfully Hogwartsian title of Chamber President – was having none of it and ordered them to disclose.)

The Chamber President, Peter Lane, also refused to overturn the initial decision, noting that the Cabinet Office’s cock-up was entirely their own fault, and adding:

It is generally unacceptable for a body with a direct interest in the outcome of proceedings to stand back, await the outcome in the First-tier Tribunal and only then seek to become involved.

They were also refused permission to appeal. Harsh. But the government remains dissatisfied and so is begging the Upper Tribunal, an emanation of the High Court, to let them appeal. Not only that, but their barrister, Matthew Hill (fresh off being Junior Counsel to the Hillsborough Inquest) is yet again demonstrating a commitment to open justice by seeking to have the entire appeal conducted in private, ie. with the public and myself, the other party, excluded.

Reason? “Due to the profile of the issues.” (All these pathetic attempts to suppress the truth from a citizen – by the government department in charge of freedom of information policy!)

There is a risk of [this matter] becoming a veritable procedural imbroglio. The default position is that a hearing “must be held in public” […] I simply put down a marker that the Judge (whether myself or a colleague) is going to need very strong reasons to depart from the principle of open justice. At first blush I am struggling to see how the “profile of the issues” or the possible sensitivities involved can justify a hearing in private.

So there. In the meantime, for you all to enjoy: here is a copy of the invoice in which Tony Blair demanded his £115,000. Sadly they’ve redacted his bank details but you will notice how they happily paid up without asking for any further receipts or documentation to support the claim.

I’m going to get “veritable procedural imbroglio” printed on a T-shirt and wear it to the hearing from which they tried to exclude me.

The Book of Donald

Now there arose a new President over America, who knew not Rosa Parks. And he said unto his people, “Behold, the Muslim/ Jewish/ Hispanic/ black/ Mexican/ female/ pro-human-rights population is too mighty for us. Come, let us deal wisely with them, lest they multiply.”
Therefore he did set over them great burdens. 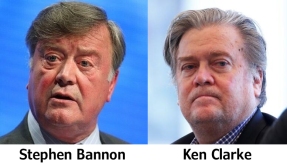 And the first burden he set is called Stephen Bannon and he is the White House’s new chief of strategy.

Which is slighly worrying, because if Mr President were to say, f’rinstance, “Stephen, my man, what is your view of the Jews?” then Bannon might be tempted to reply with what he said when criticising his daughter’s school, namely that Jews are “whiny brats”.

In fact, in the words of former Republican Party strategist Ana Navarro, Bannon is a “white supremacist, anti gay, anti Semite, vindictive, scary-ass dude”. Yes that’s right: as if his various extremist political views weren’t scary enough, so is his ass! Which I therefore do not covet.

Meanwhile, quite aside from Faragegate, Trump has made friends with Boris Johnson (presumably they bonded over having silly hair) who called the disappointment over Clinton’s loss “a whinge-o-rama” and Trump himself “just a liberal guy from New York”.

Readers with memories longer than a fruit fly may remember the last time Boris spoke publicly about Trump:

The only reason I wouldn’t go to some parts of New York is the real risk of meeting Donald Trump.

So yes, the free world is in tatters and at least two rabid extremists are about to enter their new offices in the White House. But on the plus side…

No, actually. Can’t think of anything. Sorry.

Corbyn’s train scandal (no, not that one)

Does the following qualify as ‘travelling on a railway with intent to avoid payment of the fare’:

A normal human being would say ‘yes’, right?

According to the 1977 High Court case Corbyn v Saunders [1978] 1 WLR 400, one Piers Corbyn (you may have heard of his younger brother) thought differently.

Crazy-haired Piers (pictured) had made a habit of travelling on trains, paying a token amount and handing over notes like the one above. To his great astonishment, he found himself convicted of fare evasion, and appealed on the grounds that  he hadn’t tried to avoid payment of anything, after all that’s why he left a note with his name and address.

Wonder what his brother Jeremy ‘re-nationalise ’em’ Corbyn would think.

The Rubik’s Cube has always been regarded as a cube with a twist (You’re fired. -Ed.) but apparently it isn’t enough of a twist, because the European Court of Justice has just ruled that its shape is not distinctive enough to deserve a trademark.

Although it is possible that judges were frustrated with the fact that the British company manufacturing the cubes presented their legal papers in a jigsaw format which required skill and patience to reassemble, Justices Öppenli-Gae (Austria) and Ecks-Fenßer (Germany) reached their decision on the basis that the “rotating capability which is well known to consumers” was not sufficient to justify protection.

The case was brought in the joint names of Oxo, Snooker Chalks R Us and the Pilgrimage Board of Mecca, all of whom have been frustrated in their attempt to use cubes for their own businesses.

And I can’t help wondering: where was the outrage? Why were these judges not branded Enemies of the People? Double standards or what…

Please pay your full fare before leaving this blog post

Well, as the embassy of time desperately seeks to shut out the Nigel of destiny, and as the government lawyer of fate enters into the private hearing of eternity, it seems to be the end of the blog post.

In tonight’s episode, the Minister for the Cabinet Office was played by Ben Gummer, represented by Miles Stock and Matthew Hill, and the Ambassador to the United States by Kim Darroch. Fares were evaded by Piers Corbyn and recouped by Sir James Roualeyn Hovell-Thurlow-Cumming-Bruce PC (yes that was really his full name). The concept of a cube was invented by Mr Rubik. This was an Gabrielquotes production!