The world seems surprisingly, er, surprised at the revelation that Donald Trump has been using his office as President of the United States to do some silly things like racism, sexism, undermining the rule of law, climate change denial, Holocaust denial, reality denial and grabbing Theresa May by the hand.

His wall-building plan received warm endorsement Binyamin Netanyahu, who highlighted the success of his own wall. Trump, like Bibi, will ban women from singing near his Mexico wall. Isn’t it touching how racist demagogues stand up for each other.

Trump also tweeted at a bunch of judges, “SEE YOU IN COURT!”, which has led to further lawsuits against him for alleged breaches of the constitution’s Caps Lock Clause. 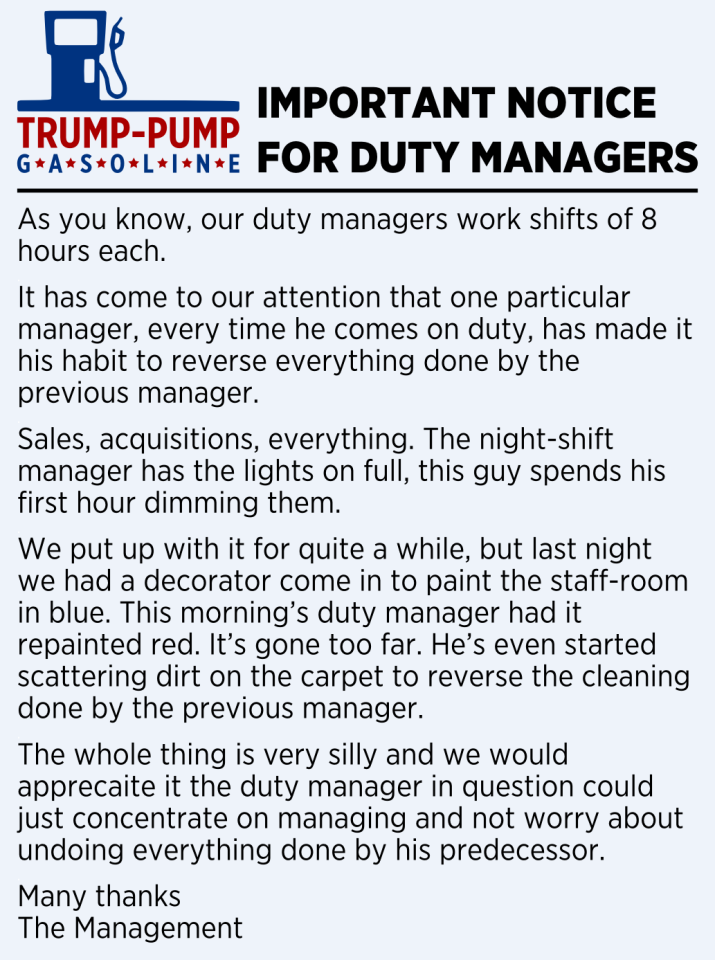 In other news, a spokesperson for the human-pig hybrid created by a lab in California has asked of the world: “Please ease off with the Trump jokes. Yes, we get it, it’s funny to compare the President to a pig in human form. But it can be very hurtful for real pigs in human form to be compared to Donald Trump.”

The gig economy – companies which classify staff as contractors rather than employees – took a hit last week. No, I’m not talking about the strong message against slavery that God sent humanity in last week’s parasha. I’m talking about the Pimlico Plumbers case.

Plumber Gary Smith (which is somehow such a plumbery name) was regarded as a self-employed contractor by Pimlico Plumbers, which regarded itself as an agency helping contractors find work.

But three judges of the Court of Appeal disagreed, holding that the true relationship between Smith and Pimlico was that of employee and employer, as characterised by a requirement of ‘personal service’: if they sent Smith to do a job, Smith was required to do it and could not send a substitute, as could a truly self-employed plumber (if they weren’t just going to make a lame excuse and charge an extortionate second call-out fee anyway). The ruling follows similar decisions against Uber and CitySprint.

Anyway, I thought I’d have a gig of my own, and so below please click the triangley thing inside the circley thing to listen to my number one hit, a new take on that Nina Simone classic, I Wish I Knew How It Would Feel To Be An Employee:

The loonies over at Spiked have completed their 2017 Free Speech University Rankings, labelling Britain’s universities as Green, Amber or Red depending on how tolerant they are towards free speech.

Except, ‘tolerant’ isn’t necessarily the right word. Because the rankings are based not on genuine concerns around freedom of expression on campus (Gabrielquotes passim). No. They’re based on something different altogether.

Let’s take a look at their views on Sussex University for instance:

Oh the totalitarian fiends! My workplace has a policy to promote harassment and bullying of one’s colleagues, and I don’t see why staff at Sussex should be treated any less favourably.

The University of Westminster Students’ Union, meanwhile, comes in for criticism for having a policy against “intolerant or discriminatory behaviour” – Spiked criticises them for having it in the first place, whereas I think that, if anything, it’s too little too late given that a Westminster alumnus is literally the face of Isis.

Cambridge is considered to be a moderate bastion of freedom, whereas Oxford is ranked Red for Evil, due to its union’s practice of warning students that potentially triggering topics, such as rape and sexual assault, are about to come up in meetings. In Spike’s words, the purpose of this policy is “to give enough time for students to prepare themselves or to leave”. So it’s clearly a hell of a restriction on speakers’ absolute right to aggravate students’ anxieties to their heart’s content without the risk of said students leaving the room.

Spiked: what a bunch of rankers.

Every year, the US State Department publishes a list of all gifts given to everyone in the administration. This is for transparency: supposedly, government officials are less likely to favour foreign potentates on account of receiving expensive gifts, if the fact of their having received the gift is on the public record.

So, let’s delve into the pressies that the Obamas received in their final year:

It’s not just Barack himself who got lucky, though. The Vice-President received “nine 12-inch piees of cotton cloth” from the President of Benin – although on reflection that may have been a misprint for ‘President of Denim’.

John Kerry got an “elephant on a wooden presentation base”: he keeps it in his room but he doesn’t like to talk about it. The Director of the CIA received a “metal model of a mosque entrance”, which will be useful for training spies in how to enforce Trump’s Muslim ban, and his Deputy Director is now the proud owner of a “painting of angel in leather case“ (goodness only knows how the artist managed to get the angel into the leather case for long enough to paint it).

Who knows what the Trumps will get?

The scheme was instituted by the so-called Dubs amendment, also known as section 67 of the Immigration Act 2016, which provides:

The Secretary of State must, as soon as possible after the passing of this Act, make arrangements to relocate to the United Kingdom and support a specified number of unaccompanied refugee children from other countries in Europe.

Only 350 children have so far benefited from Dubs, and the government’s sudden decision that they’ve reached the “specified number”, just at the very moment that they realised they couldn’t be arsed with all this refugee nonsense any more, is kind of suspect.

If I were a high net worth individual, diddy diddy dum…

An influential committee of MPs has recommended that HM Revenue & Customs get tougher on tax-dodging by the ultra-rich, or, as they’re technically known by Sir Humphrey, “high net worth individuals”.

If the public are to have faith in the tax system then it must be seen to have fairness at its heart. It also needs to work properly. In our view, HMRC is failing on both counts.

And those two counts are in addition to all the barons, earls, dukes and other toffs being given an easy ride by the system.

Well, as the Muslim refugee of time is turned away by the border guard of destiny, and as the appellate judge of fate hands down the restraining order of eternity, it seems to be the end of the blog post.

In tonight’s episode, the Executive Order revealed the United States to be in a state of executive disorder. The ultra-rich were let off the hook by HMRC and the argon gas was harvested by the Sultan of Brunei. Spiked was severely repressed and banned from publishing its university rankings (oh hang on though). Pimlico Plumbers needs a new passport. This was an Gabrielquotes production!