Now that we know just  how much Donald ‘Stable Genius’ Trump likes big buttons and he cannot lie (but he can present alternative facts), it seemed worth producing this highly serious listicle of Those Top 10 Buttons You Should Know About.

In tenth place: that button that was in a transparent plastic bag sewn into your new suit that you dropped down the back of the sofa and now can’t find.

In ninth place: the ANY key of ‘hit any key’ fame.

In eighth place: the WIPE ALL DATA button located perilously close to the INSTALL UPDATE button on my iPhone.

In seventh, sixth and fifth places: those three bits of coal that were left behind after the tragic climax to ‘The Snowman’.

In fourth place: that stick a conductor uses to conduct the orchestra (Is this right? -Ed.)

In third place: all the buttons that Steve Jobs had phobia of.

The government has decided that the best solution to the apparent menace we face from overseas – evil migrants, people-traffickers, terrorists and more trying to infilitrate our borders – is to rely on a band of plucky volunteers with pitchforks and frying pans to defend us.

Since Britain doesn’t really have borders (except the Irish one, and the less said about that the better), this band of latter-day Harold Godwinsons are presumably going to spend their time patrolling the beaches and coves of our green and pleasant land, perhaps disrupting some implausibly-accented men in eyepatches from smuggling rum and returning lost dogs to their grateful owners.

Donald Trump isn’t the only one who’s been in trouble on Twitter in 2018. No, this isn’t about Virgin Trains, but Toby Young. Toby Young has just been appointed to the board of the new university regulator, charmingly called the “Office for Students”.

Since his appointment was announced at 00:01am on 1 January (which wasn’t in any way a government attempt to bury bad news), he’s been busy going through and deleting his past tweets which might throw into question his fitness to hold public office.

Toby Young (pictured left, uncharacteristically) is a commentator well-known for sensible views such as complaining that schools are expected to be wheelchair-accessible (“ghastly”) and proposing the repeal of the Equality Act – which protects women, ethnic minorities, people with disabilities and more from discrimination. His suggestion that Britain go back to the good old days when people could refuse to employ blacks at will is no doubt an example of what Boris Johnson described as Young’s “caustic wit”.

However, he has now held his hands up and announced that he “regrets” having [been caught] making inappropriate remarks, and just to reassure students that he really is there for them and will be a strong voice in the promotion of their interests, he’s recorded this special song for us about how, really, deep down, he’s our friend: 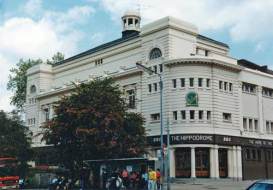 Just a quick note: last month the Golders Green Mosque Martyrs expressed a concern that having an Islamic centre open in Golders Green would cause a serious threat to the Jewish community’s security.

I’m pleased to report that, a month on, the mortality rate in NW11 continues to be approximately the same as before; less than half of local Jews have been forced to make aliyah for their safety; and only six kosher shops have been ruthlessly driven out of business by newcomers to the neighbourhood.

I’ll keep you all posted as the year goes on.

National department store group House of Fraser (with 59 branches across the UK and Ireland) has written to its landlords asking for “support” with the rent after a “difficult Christmas”.

This could mark a turning point in Big Business.

Other companies have now followed suit:

And finally, a little romance

Following the obligatory inspection of Ms Marney’s Twitter history, it emerged that her views include calling Grenfell tower “a nest of illegal immigrants”, and suggesting that women who complained of sexual abuse by Harvey Weinstein are “whinging little divas”.

And I just wanted to close this new-year blog post by saying how lovely it is to see two people who are so perfectly matched end up together. In so many relationships, the revelation that one partner held disgusting opinions and expressed them in insensitive ways would rock the boat, perhaps even drive the couple apart.

But I think Henry Bolton and Jo Marney are stronger than that, and that Henry – on learning Jo’s views – will only become closer to her.

My credits are bigger than yours

Well, as the nuclear bomb of time is edited by the social media despot of destiny, and as the volunteer border guard of fate winkles out the economic migrant of eternity, it seems to be the end of the blog post.

In tonight’s episode, Donald Trump was played by Ernst Stavro Blofeld, and the Mosque Update will hopefully have reassured mosque martyr Sharon Shitpael. The new Students’ Tsar is Toby Young. This was an Gabrielquotes production!