Two of the eight candles failed to turn up to this festival all about the impact of oil on our world, and they were replaced by ice sculptures, but nevertheless the time for Channukah is nearly upon us.

If you’ve forgotten to get topical gifts for your loved ones, fear not, for hereby unveiled is this year’s edition of Gabriel Festive Innovations! Click below (or here) to view:

Now that that’s over with, we can get on with…

You knew that this parody was just waiting to happen, right?

EM: This interview is, of course, totally unprecedented, partly because I won’t be born for another 2,100 years or so, but also because of the nature of the allegations you’re facing.

A: I’m very happy to be here and able to put my case across.

EM: We’ll begin with the most troubling accusation, this claim that you were responsible for defiling the Temple in Jerusalem by filling it with pigs.

EM: But you were in Jerusalem at the time, I think?

A: I was in Jerusalem at the time, but only because it was a convenient place to sleep over on my journey from Ipsus to Persepolis. No other reason.

EM: Did you not think twice about spending time in a city where atrocities were taking place?

A: Atrocities? No. It was a simple, straightforward voyage of conquest with a few friends. That’s the sort of thing that people do all the time.

EM: Were you aware that Jerusalem was occupied and being forcibly Hellenised at the time?

A: I didn’t notice that, but what you have to understand is, Jerusalem is a big place. All sorts of things go on there that not everyone sees all the time.

A: I’m saying I don’t recall it happening.

EM: There have also been claims that you performed involuntary circumcisions of Jewish men. How do you respond to that?

A: Not only is that completely untrue, but I actually can’t perform a circumcision because I’ve had a made-up medical condition that would make that impossible, ever since someone shot an arrow in my direction during the Sixth Syrian War.

EM: That’s an extraordinary defence for you to adopt, because several individuals have come forward quite explicitly to say that they remember you circumcising them. And you would think that’s the sort of thing they would clearly remember?

A: I wasn’t even in Jerusalem at the time they say these incidents took place.

EM: Where were you?

A: I was in a tavern in Seleucia having a flatbread with my daughter Laodice.

EM: You remember what you ordered in a tavern in Seleucia, years later? Is that not a bit odd?

A: Not really. I remember it so clearly because it was just a few days after I defiled the Temple in Jerusalem with pigs and forcibly circumcised those… oh, damn!

Some interpretations of the Channukah story portray the Maccabees less as heroes and more as religious extremists who used aggression to intimidate their fellow citizens from modernising their practices and assimilating their customs. In which case…

The Sanhedrin in Jerusalem has permanently banned protests outside a primary school near the Jaffa Gate. A group of Maccabees had been protesting on a regular basis outside the school ever since it decided to start teaching the Greek alphabet alongside Hebrew and to cover some Greek gods as part of their RE classes.

A leader of the protests, identified only by his first name ‘Judah’ and his nickname ‘the Hammer’, was defiant. “This is a serious abuse of our freedom of speech,” he told reporters. “If we want to stand outside a school waving weaponry and abusive signage at small children, what right does a court have to stop us?”

The protesters are fundamentally opposed to schools teaching anything about any culture other than the pupils’ own Jewish background. “Why do kids at that age need to know about Greek ideas like gymnasia and art?” demands Judah. “Just let them enjoy their childhood. Why sully the classroom with such heathen, un-Jewish concepts as sport, mathematics, democracy and tzatziki?”

A spokesperson for the school insisted that the controversial new lessons had been misrepresented. “These classes do not seek to promote a Greek lifestyle,” they said. “We’re simply trying to give our children a good grounding for life in the melting-pot that is modern Jerusalem, and equip them to make their own choices while respecting people from all walks of society.”

Judah the protestor reiterated, “We completely refute any suggestion that our youngsters should be taught to respect people from all walks of society. If anyone should be brainwashing my children, it’s me.” He then issued a call to all Jewish agrarians across the city to gather together their most lethal farming implements, knives, pointed sticks and narwhal tusks, and to stage a violent uprising against their assimilationist neighbours.

A tiny bit of election

I’m really too fed up to do much post-election coverage, but you can read the sermon I gave on Shabbat here, and I do have a small ditty below based on a snippet of the BBC election night programme in which a reporter mentioned that Labour’s Red Wall had “crumbled”. That was just too similar to a James Bond theme song to let slip.

.
Oh, and this bit didn’t involve any work for me because it’s a genuine fragment of an ancient Hebrew mansucript recovered from the Islington Genizah. Behold, the Mishnaic tractate on government formation: 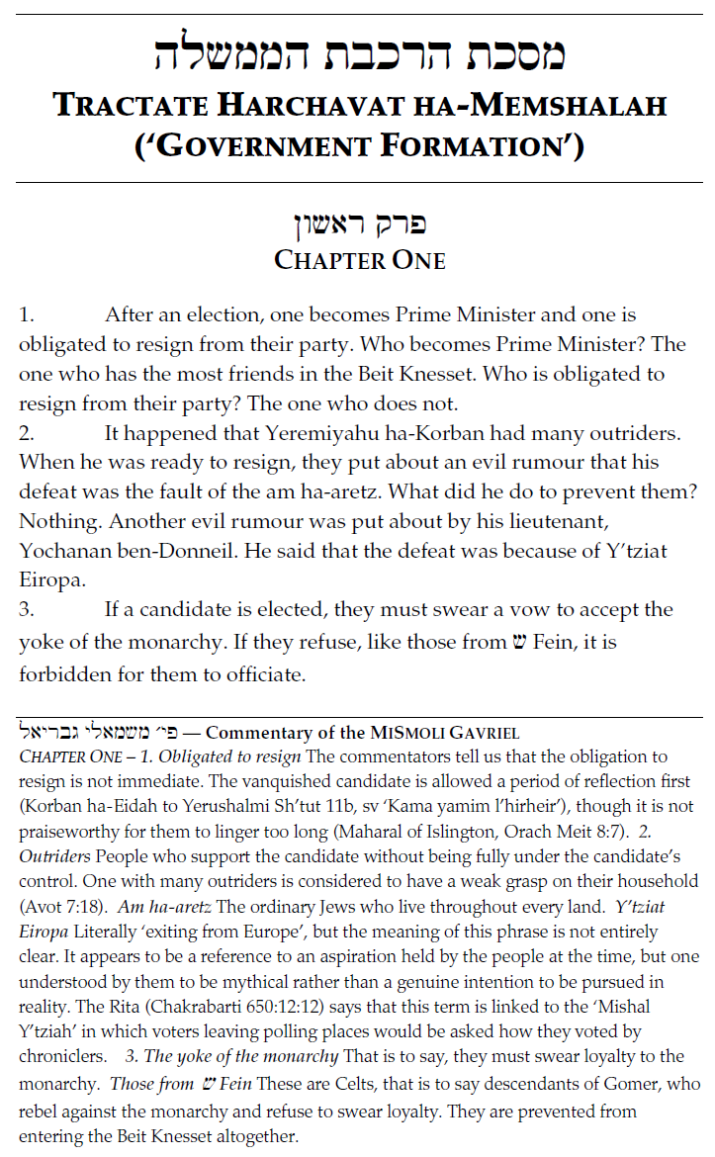 Chag sameach, and see most of you (ie the world) at Limmud. 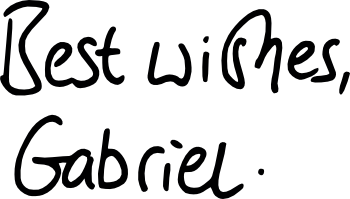