Channukah 5776 is ‘literally’ around the corner, so it’s once again time to buy some seasonal gifts for your loved ones. Therefore, you are cordially invited to sit back, take the weight off your feet and transfer it onto your buttocks, as you peruse the 2015 edition of:

A judge in Chelmsford has allowed a defendant to take their pet cat into the witness box with them for “emotional support”.

According to BBC Mews, Charles Gratwicke, the Circat Judge in charge of the trial, presided over the “somewhat odd” proceedings while the cat sat in a shopping trolley and watched languidly. In fact, the witness box was so crowded that there was barely room to swing the creature.

Prosecutors objected to the unusual situation, telling Gratwicke, “You have got tabby kidding.” However, the 72-year-old – who was charged with stalking, though apparently not mogging – would apparently have been feline unwell and unable to give evidence were he not purrmitted to have the animal with him. The judge also forbade the defendant being asked too many questions, ruling: “Remember, curiosity killed something or other.”

After the defendant and his pet withdrew, everyone started behaving completely wildly: after all, while the cat’s away…

If only I could think of some good puns for the situation.

A matter of the utmost Syriasness

Yesterday, Parliament voted to give our armed forces an interesting Christmas. Fortunately, RAF radio channels are already buzzing with an exciting new Christmas single: so here it is…

I’m currently shopping round for car insurance and feel I reached the dregs of the 21st century when I came across the company InsureTheBox.

InsureTheBox say that young drivers can save “an average of £517” by taking out one of their new ‘telematics’ policies.

Telematics is a new Minority Report-style technology whereby the insurer fits a “black box” into my car, and thereby monitors my journeys, location, time, speed, sudden acceleration and braking, and more. Not sinister at all.

Now, at school I had a teacher who would occasionally widen her eyes and say, in perfect passive-aggressive Dolores Umbridge style:

Gosh was that a weight off my mind. But InsureTheBox essentially makes the same pledge:

The telematics box alerts us when it senses a strong impact, so if you have an accident we can know straight away and call you to make sure you’re OK.

How very fortunate! I do feel lucky to have these benevolent panoptica watching out for me 24 hours a day. Lucky they wouldn’t dream of turning their hand to anything evil…

In which no-one is permanently silenced

An Australian start-up company has worked out a way to cheat death and is looking for investors, according to The Telegraph.

The founder of Humai told journalists:

What a ghastly prospect.

The technology essentially involves creating a ‘backup disc’ of the paying individual, which can then be restored to their brain after death. But surely this could be made far more profitable if Humai offered customers the opportunity to have their personality implanted into someone else’s body…?

Overlords at Sussex University have published their draft new Job Description & Person Specification for their next Vice-Chancellor. Well, they’ve published it to students and staff only, but I’m fairly well-connected in that regard.

The document shows that the University intends to break with tradition by giving the new post-holder the task of “engaging with the views, ideas and aspirations of the whole community” (in contrast to Michael Farthing’s decision to hire a security company to prevent the advocacy of views, ideas and aspirtaions altogther), “helping to foster a set of behaviours across the institution that will draw out the best of all staff and students” (in contrast to Michael Farthing’s decision to spend hundreds of thousands of pounds disciplining students for expressing their opinions) and “ensuring the University is socially and environmentally responsible” (in contrast to Michael Farthing’s decision to contract with two companies, one of which is blacklisted by the UN for corruption, the other having been prosecuted for exposing staff to asbestos).

Unfortunately, the chances of such a visionary leader actually being appointed are substantially reduced by the make-up of the selection panel:

So, the big eight days is here on Sunday. I hope everyone’s got all the correct equipment lined up: if not, then the Maccabee Menorah Company is opening eight branches in the near future.

On behalf of Gabrielquotes, may we wish all our readers a joyous festival of light, and we’ll see you soon (assuming we have enough oil left to keep the light going) for more of the gentle, affectionate raillery for which these pages are known. 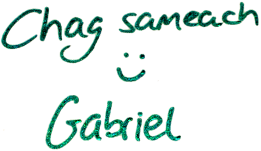 In tonight’s episode, Gabriel Festive Innovations made a substantial profit. Roslyn Pine showed her support for freedom of expression, and Sussex University made at least perfunctory moves in that direction as well. Death was cheated by Australia. Civil liberties were cheated by InsureTheBox. The Little Red Book was produced by the Movement for Reform Judaism. This was an Gabrielquotes production!