Gabrielquotes would like to take this opportunity to wish his readers a joyous Purim – and he invites them to recall how this is a celebration of the Jews being saved from violent massacre, so perhaps we could take a day off from pretending that anything remotely similar is seriously about to take place in Woking, upsetting and unacceptable as Vicky Kirby’s behaviour is.

Be sure to read further down the page to hear about the Palestine Solidarty Campaign’s attempt to get a stall at Richmond’s May Fair and how you can offer Israel your practical, concrete support.

Pensions secretary Iain Duncan Smith dramatically resigned on Friday, citing concerns over cuts to allowances for disabled people. His resignation letter said, “The advancement of social justice was my driving reason for becoming part of the Cabinet.”

(In light of his resignation letter you need to restart this section differently. -Ed.)

To be known as St Iain Duncan of Doughnuts, he will be inaugurated as the patron saint of Agreeing To A Policy Then Resigning In ‘Protest’ Against It So As To Make The ‘Leave Europe’ Campaign Look Less Barbarous.

The Government is now recruiting for a new Work & Pensions Secretary. Somewhat ironically, the unemployed are not eligible for the post, so don’t expect to pop down to your local JobCentrePlus and see an advert for: 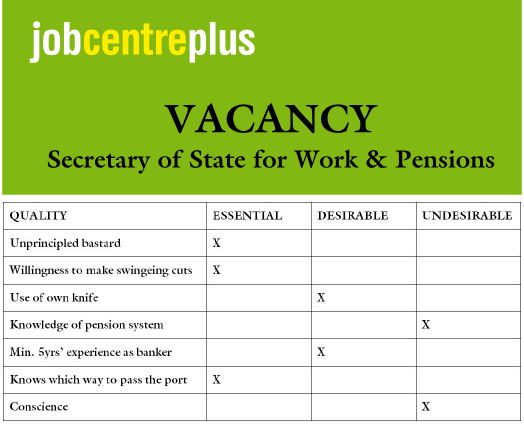 Watch this space… I sense a new reality TV show coming on.

The most exciting bit of last week’s Budget announcement was the new ‘sugar tax’, also known as the Jamie Oliver Levy, but also rearing its head again was the Tampon Tax.

For readers unfamiliar with this concept, for the purposes of British tax law, feminine sanitary products are considered to be ‘luxury items’ and those wealthy so-and-sos who buy such items pay 20% VAT on top of the price.

But there was an exciting announcement this year: George Osborne has promised to pass on all of the money raised by taxing tampons to breast cancer charities and, in his words, “other girly stuff”.

Similarly, the Hatton Garden safe deposit robbers, having been found guilty of three counts of Taking Loads of Gold and Stuff in a Build-Up Area, have promised to donate the proceeds of their crime to the North Salford Donkey Sanctuary in return for a lighter sentence.

Leaders of the three main political parties (pictured left) differed in their views on the Budget.

There are thieves at work! Botanical gardens at Kew and Wisley have reported a spate of thefts. They suspect that the stolen items are being sold through a fence. (Is this right? -Ed.)

But it’s hardly surprising: after all, you’ve got to pick a flower or two. Song included for free below.

Surrey PCC Kevin Hurley (pictured) is an odd character. He’s going to quite some lengths to get re-elected on 5 May.

This seems eccentric given the forcefulness of his many statements that he doesn’t want a second term: “If I lose, my problem is solved and I won’t have to waste any more of my precious time with people continually criticising” – and “If I don’t get elected I will breathe a sigh of relief, because I’ve had enough of this” – and more.

But he’s not all shy and retiring. (I wish he was retiring. -Ed.) We knew he was – at least in the opinion of Private Eye – bent and childishly abusive, but it turns out he’s also delusional.

In a fascinating interview he gave to the New Statesman in 2014, he told reporters:

Kevin’s 2,800 followers are regularly treated to his views on the great issues of the day, such as his desire to “break the legs” of a particular criminal, after first “battering” him. Perhaps he’s of the view that his role as Crime Commissioner requires him to commission crime.

But voters needn’t feel aggrieved at having to pay the £70,000 salary of this loony thug: it turns out we’re getting an absolute bargain, as Hurley told the New Statesman: 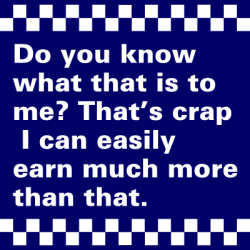 The election’s on 5 May. He needs to lose. And after all, he wants to lose: he said so.

The Office of National Statistics has sensationally revealed that 1 in 3 Britons are “in the wrong job”. Managers up and down the country are apparently getting increasingly narked off that every morning, they get to work and one-third of their colleagues are random people who’ve turned up at the wrong office.

Those particularly criticised for holding jobs for which they are utterly unsuited included Jeremy Corbyn, Boris Johnson, Theresa May, Michael Gove, Jeremy Clarkson, Katy Bourne, Kevin Hurley, Michael Farthing, Stephen Polla (I think we get the gist of it. -Ed.)

Iain Duncan Smith frankly confessed last week that he was in the wrong job (Cut to the credits. -Ed.)

All the fun of the fair

The Palestine Solidarity Campaign is having a tantrum because they’re not being allowed to take part in the Richmond May Fair in Surrey.

I’m actually quite surprised that the ham-fisted PSC were interested in such a cosy, faux-rural environment anyway. A WI cake stall is hardly the place for them to foment their usual brand of ignorent hatred.

Those planned PSC activities in full: 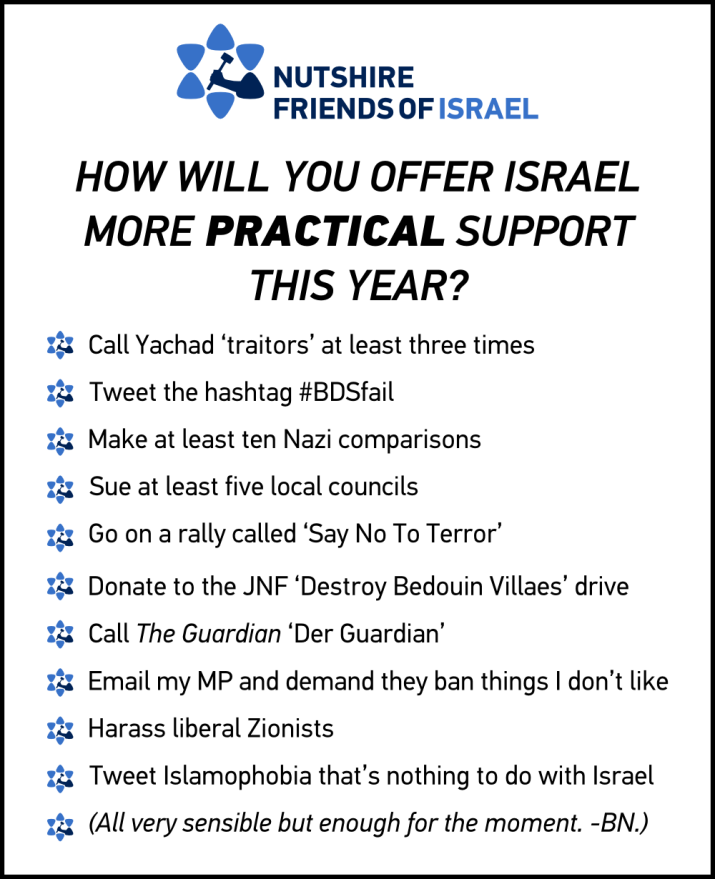 Well, as the pensioner of time criticises the benefit cut of eternity, and the woman of fate buys the luxury tampon of destiny, it seems to be the end of the blog post.

In tonight’s episode, the petulant PCC was played by Kevin Hurley, and the petulant Cabinet minister by IDS. Richmond Fair excluded the PSC, and Vicky Kirby re-left the Labour Party. Tampons were taxed by George Osborne and the wrong jobs were held by 1 in 3 Britons. North West Friends of Israel and Sussex Friends of Israel provided editorial support to one particular section. This was an Gabrielquotes production!